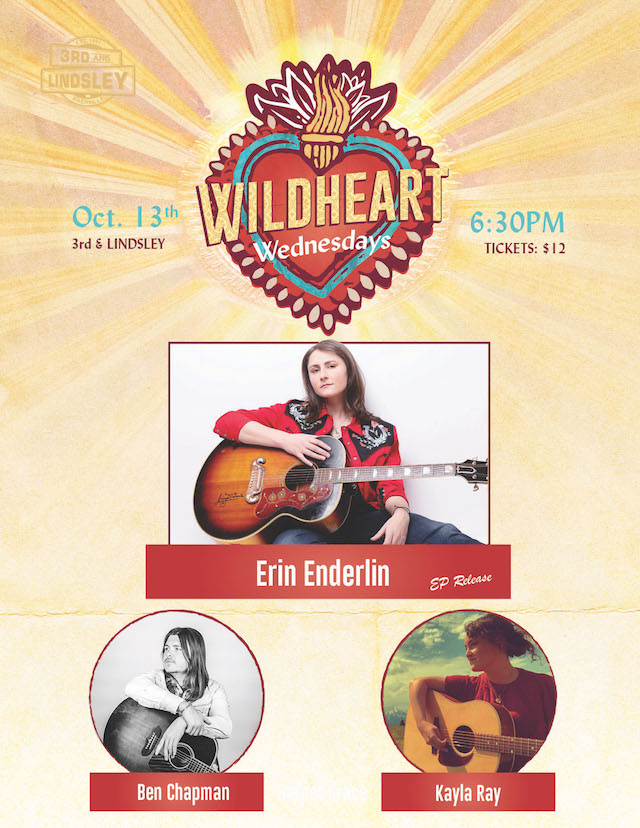 Join me in celebrating the Wildhearts, the songwriters and musicians who aren’t afraid to create music with the freedom and courage to be who they are and know what they want. See you there!

Erin Enderlin: Erin Enderlin is releasing a new six-song EP, Barroom Mirrors, available Oct. 15. The independent project features collaborations with 4x Grammy award winner Rosanne Cash, along with “If There Weren't So Many Damn Songs,” with Canadian Country Music Hall of Fame and Grand Ole Opry member Terri Clark. She will be performing her new music live at Wildheart Wednesdays. Erin has also written for many artists including her personal heroes Reba McEntire, Rhonda Vincent and Rodney Crowell.

This EP follows the release of her critically acclaimed Faulkner County. She is a Nashville-based singer, songwriter and storyteller and has been writing and recording new music on her own terms, toying with the idea of continuing to release a song at a time rather than focusing on another full-length project.

Throughout her career as both a songwriter and an artist, Enderlin has remained steadfast in her commitment to making music steeped in the genuine traditions of country music and it's that conviction that is fueling a great deal of her current success.

Opening the show as Erin’s guests are two of her collaborators:

Ben Chapman: Nashville-based country artist, Ben Chapman. Originally from LaFayette, Georgia, Chapman started playing in bars across his home state at the age of 17, where he piqued the interest of a few seasoned Nashville songwriters. Chapman is known for his soulful voice and guitar skills. His music is heavily inspired by the smooth groove and hard-hitting sounds of the 70’s, pulling inspirations from bands like the Allman Brothers, Little Feat and Hank Williams, Jr. and songwriting legends Guy Clark and Roger Miller. He recently signed a deal with Hang Your Hat Music and Concord Music Publishing.

Kayla Ray: Waco, Texas born singer-songwriter Kayla Ray wipes clean the dust of nostalgia and can bring even the hardest heart to a place of reflection and understanding. She’s been touring the US and Internationally as well doing it all on her terms the way she wants to do it. She is a WILDHEART. She has shared the stage with the likes of Cody Jinks, Erin Enderlin, Jo Dee Messina and Whiskey Myers.