(SOLD OUT) THE PIANO MEN: THE MUSIC OF ELTON JOHN AND BILLY JOEL w/ JESSE ISLEY
3rd and Lindsley
All Ages 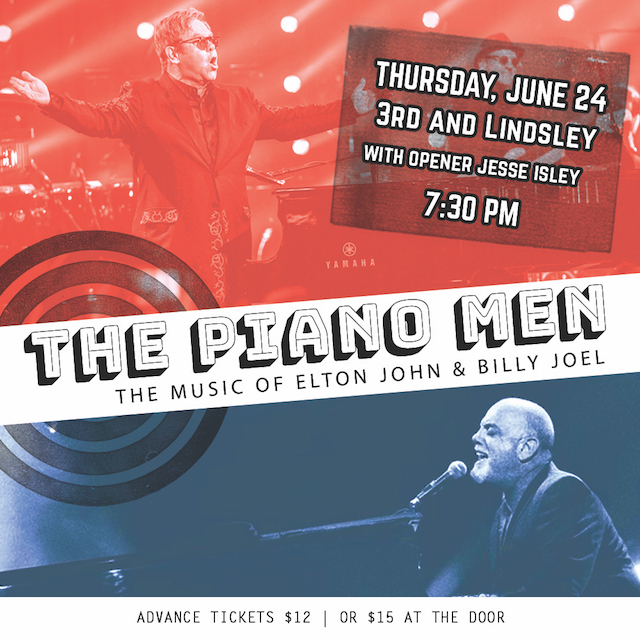 $15.00
Formed in 2015, The Piano Men are made up of some of Nashville’s top session and touring musicians, who banded together to pay musical tribute to two of music’s biggest legends, Elton John and Billy Joel. Designed after Elton and Billy’s Face 2 Face tour, witness this high energy 9 piece band deliver note for note renditions of “Rocket Man,” “Bennie and the Jets,” “Scenes from an Italian Restaurant,” “You May Be Right,” and more!


Jesse Isley -
Born and raised in Columbia, SC, Isley first picked up a guitar at 11 years old. He was an active musical force throughout the Carolinas as a guitarist, songwriter, and producer for various artists and bands. After receiving a degree in music, he re-located to Nashville where he continues his work as a songwriter and session musician.  Influences for his original songs include JJ Cale, Grateful Dead, George Harrison, John Mayer, & Allman Bros. He has appeared on many stages across the country, including The Late Show with David Letterman and several appearances on the Grand Ole Opry.  In 2015, he released his first solo album titled 'Realistic'. In 2017, his 2nd album 'Inglewood' was released. His band features the talents of Adam Fluhrer, Brian Kilian, Adam Beard, & Brady "Pairs" Beard.