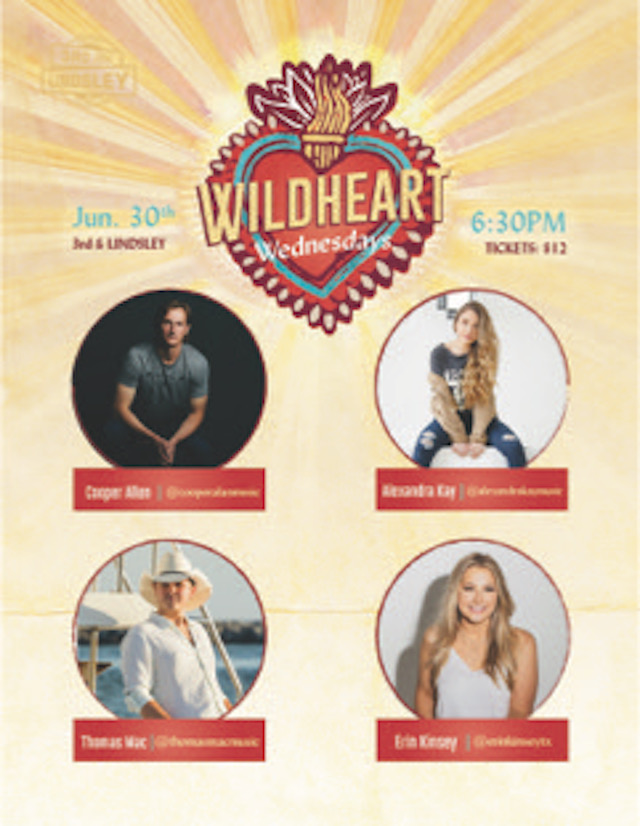 Cooper Alan:  This incredibly talented young artist moved to Nashville from North Carolina and it hasn’t taken long for his career to take off. He has over 2,900,000 followers on TIkTok and his new single “Too Soon” is streaming on all the platforms. He has had the honor to write with some of Nashville’s biggest songwriters including Rivers Rutherford, Gary Burr, Lee Thomas Miller, Victoria Shaw and Leslie Satcher. This summer he will be opening up for Joe Nichols. He will be backed by his amazing band for our first full band show at Wildheart Wednesdays.

Alexandra Kay:  She is one of Cooper’s special guests and she is force to be reckoned with. Generating millions of plays weekly on her videos, Alexandra Kay commands the attention of country music fans. With a voice reminiscent of Dolly Parton, Alison Kraus and Leanne Womack, AK is bringing country music back to its roots.

Thomas Mac:  This special guest is a native of Dayton, Ohio and has been performing and writing songs since he was 14. He has opened for some big time country artists, Tracey Lawrence and Lee Brice. His voice will melt your heart.