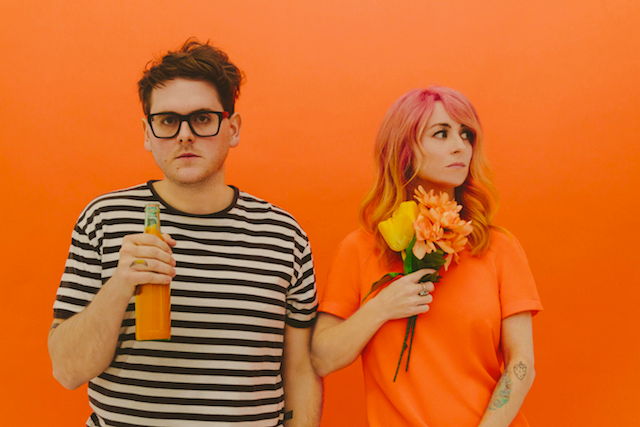 On their new album Glazed, *repeat repeat deliver a batch of songs entirely true to the album’s title: sugary and sticky and impossibly shiny, all glistening harmonies and candy-coated hooks. But beneath the gloss lies something more jarring and jagged, a raw vitality generated by the Nashville band’s buzzy rhythms and blistering guitar work. Fortified by the distinctly thoughtful songwriting of husband-and-wife duo Jared and Kristyn Corder, the result is an album that finds an unlikely power in irrepressible sweetness.

The follow-up to 2017’s Floral Canyon, Glazed marks a period of major growth for *repeat repeat, highlighted by a 2018 debut at the Bonnaroo Music and Arts festival that saw them lavishly praised by Rolling Stone, who hailed them as “Most Enthusiastic Rockers”. In bringing the new album to life, *repeat repeat worked closely with producer Patrick Carney (drummer for The Black Keys), immersing themselves in a more rigorous songwriting and recording process than they’d ever attempted before.

The duo’s singular dynamic has manifested in *repeat repeat’s magnetic stage presence, with Jared bringing a joyfully rebellious spirit and Kristyn channeling a subtle effervescence. “The music we make is really an extension of our life together,” says Jared. “We wanted to create something that takes you out of that reality—music that makes you feel hopeful and positive and empowered, and just completely leads with love.” -Liz Barker