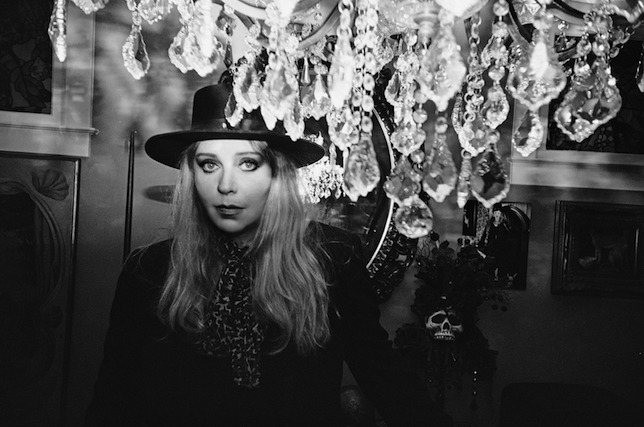 Singer, Songwriter and pop culture icon Bebe Buell is now gearing up for the release of her latest record Baring It All: Greetings From Nashbury Park. The 12 song album, her most personal effort to date, was recorded in Bebe Buell's two favorite music cities, Nashville, TN and Asbury Park, NJ.
At very select live shows, Buell will be performing songs from the new disc and telling insider tales of her fabled life, bringing her unique blend of storytelling and powerhouse rock n’ roll to the stage.

Moving to New York City from Virginia while still in her teens, during rock-n-roll’s glamorous early seventies, she immersed herself in the downtown music and fashion scene, befriending such luminaries as Mick Jagger, Salvador Dali, Patti Smith, David Bowie and Andy Warhol to name a few. Director Cameron Crowe has cited Bebe as one of the main influences for his classic rock film “Almost Famous”.

Bebe's musical career jumpstarted with her first release, "Covers Girl" (1981) produced by Ric Ocasek and Rick Derringer. It was a four song EP of obscure cover songs featuring legendary group The Cars backing her on two of the tracks, which was also, coincidentally, one of Rhino Records’ first mainstream releases.

She then formed a new group, the B-Sides, who released a pure pop 12 inch picture disc "A Side of the B- Sides" (1983) produced by Bebe's former beau Todd Rundgren, which was followed by her forming a new, tougher group called The Gargoyles, a female fronted hard rock unit. They released the influential underground singles "Jacuzzi Jungle" and "Gargoyle" (1987) and toured heavily in the U.S. and Europe. The Gargoyles caught the ear of Joey Ramone, who had the band open for The Ramones.

Her 2001 autobiography, "Rebel Heart; An American Rock n’ Roll Journey" (St. Martin's Press), was a New York Times bestseller. She now highlights her live performances with some of her best anecdotes. She also recounts intimate stories from her personal life, growing up as a military brat in Virginia, being a single mother and reinventing herself along her fascinating journey. Her tales are as entertaining and hilarious as they are inspirational.

The ever popular and always evolving Buell now calls Nashville, TN (Music City) home. She came to Nashville in 2012 to sing on an Eddy Arnold tribute album for local label Plowboy Records. Being a Southern girl at heart (being born and raised in Virginia) she immediately fell in love with the city. In her time in Music City, she has graced several local stages including four sold-out shows at the iconic Bluebird Café and recorded at famed studios, RCA Studio B and Sound Emporium. She has also been songwriting prolifically and regularly performs as guest vocalist with Thee Rock n’ Roll Residency and The Long Players, two local collectives of Nashville’s world class musicians.