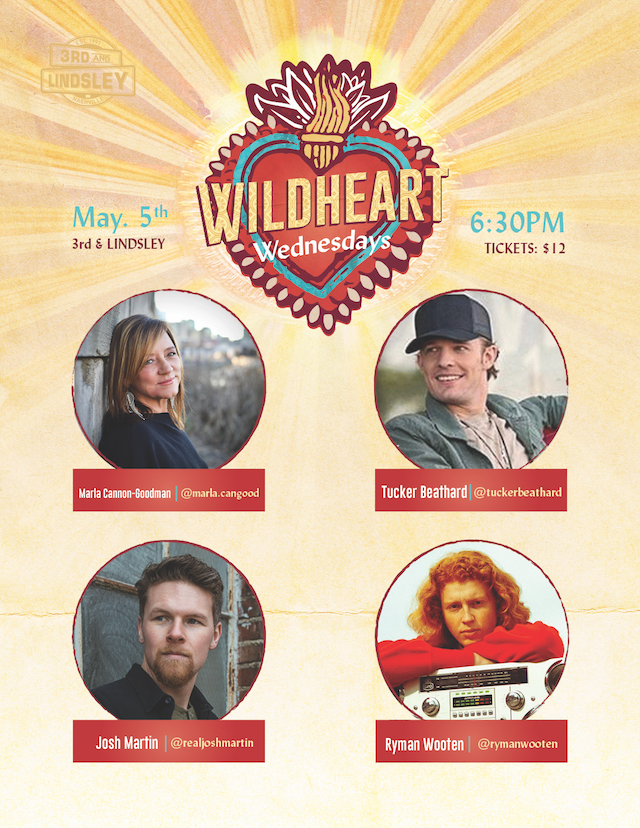 Tucker Beathard:   Sometimes not getting what you want is a blessing. For country outlier, recording artist and songwriter, Tucker Beathard, the souring of the record deal he was sure he needed, turned out to be the catalyst for NOBODY’S EVERYTHING, the first installment of a double album, and a work exponentially more compelling and focused than his shelved major-label debut. Forging a leaner, realer sound, the kid raised on Radiohead, hip-hop and the songs his father Casey Beathard has written for superstars Eric Church, Kenny Chesney, and George Strait created a taut hybrid that was more street than studio, more grit and raw emotion than polished gloss. Tucker Beathard continues being the voice for the outsider, the lost, the unrepentant and the kid nobody sees. Like Tom Petty, Bruce Springsteen and even Johnny Cash, he strives to capture the person beyond the fringe. One listen to NOBODY’S EVERYTHING, and it’s obvious where his heart lies.

Marla Cannon-Goodman:  Growing up in Kingston Springs, TN, she was surrounded by some of the greatest songwriters in the business, with one of them being her own father, Buddy Cannon. Marla was working as a nurse when her song “The Fool”, recorded by LeeAnn Womack, reached #1 on the country charts.

Her other #1’s include “Ten Rounds of Jose Cuervo” by Tracy Byrd and “Cleaning This Gun” by Rodney Atkins. She has had cuts by everyone from Sammy Kershaw, Billy Currington, Blake Shelton, Eric Church, Kenny Chesney, George Strait, and many others. You can also find her name on the Willie Nelson/Merle Haggard duet album.

Josh Martin:  Signed with Sony Music as an artist/writer in 2016; spending time writing with some of the best in the game, he released two singles “How’d You Know” and “Just My Luck.” After he didn’t see eye-to-eye with the suits who wanted him to be a slick auto-tuned radio star, he found himself questioning who he was and what he wanted to be musically. His 2019 release, Nothing Holding Me, was the first step in that direction. He released two acoustic versions from that album dubbed The Acoustic Sessions, which earned support from Spotify, Apple Music, and CMT. His most recent single, “Strange Times”, was release in September 2020 as a follow-up to “Cold Again”, which was featured in Rolling Stone Country’s “Picks of the Week.”