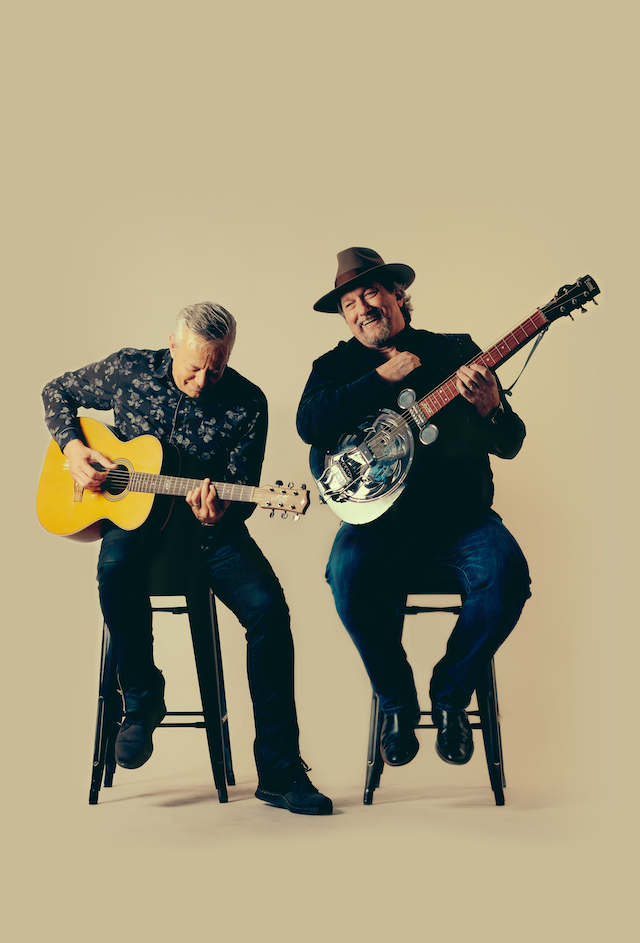 $45.00 - $230.00
Tickets
Tune into the virtual HD multi-camera concert experience that takes you inside 3rd & Lindsley to YOUR best seat in the house. Join us for the full livestream concert Sunday, December 13th, featuring TOMMY EMMANUEL & JERRY DOUGLAS, live from our 3rd & Lindsley stage! Reserve your live stream concert ticket for just $12.99.
HERE http://2nu.gs/tommy

Tommy:
Anytime you talk to any of Tommy Emmanuel’s fans, whether musicians or civilians, invariably they will speak of not one but two qualities that define his greatness. The first, predictably, is his extraordinary guitar playing. Considered by those in the know to be among this planet’s greatest guitarists, his playing is simply miraculous, as it would take three musicians, or more, to do what Tommy does solo. Who else, for example, when playing “Day Tripper,” can lay down the rhythm part, dig into the riff and sing the melody all at once on just one acoustic guitar?
Which brings us to the other aspect of his music always mentioned, and without which the first might not be as powerful or as infectiously appealing: the joy. Yes, joy. Because it’s one thing to play these multi-dimensional arrangements flawlessly on an acoustic guitar. But to do it with that smile of the ages, that evidence of authentic, unbridled delight, is an irresistible invitation to feel his music as deeply as he does. “The joy, he says, “is there always because I'm chasing it through music. Seeing the surprise in peoples' eyes is worth living and working for... I can't help but play to the people with all my heart, which is overflowing with joy of being in that moment that I’ve worked all my life for. And here it is!”
Although his expression is instrumental, he comes to the guitar much more like a vocalist, positively singing melodies through the strings. He inhabits the tunes he performs, delivering every nuance and turn of phrase. His own songs are also illuminated always with lyrical melodies that go right to the heart, such as his beautiful ode to his daughter, “Angelina,” or his great “story without words,” “Lewis & Clark.” That they resonate so deeply without words makes sense, as words only go so far. But music, coming from a genuine and joyful source, can go so much farther. Now with The Best of Tommysongs, he brings us a complete collection of his own songs, all rich with ripe melodicism and rendered with joy in real-time.

Dobro master and 14-time GRAMMY winner Jerry Douglas is to the resonator guitar what Jimi Hendrix was to the electric guitar, elevating, transforming, and reinventing the instrument in countless ways. Additionally, Douglas is a freewheeling, forward-thinking recording and touring artist whose output incorporates elements of country, bluegrass, rock, jazz, blues, and Celtic into his distinctive musical vision.

In addition to touring, Douglas has co-produced and performed on a series of platinum albums. He has produced albums for Alison Krauss, Del McCoury Band, Maura O’Connell, The Whites, Jesse Winchester, and Steep Canyon Rangers. He is co-music director of the acclaimed BBC Scotland TV series Transatlantic Sessions. In 2004, Douglas was recognized by the National Endowment for the Arts with an American Heritage Fellowship, and he served as the Country Music Hall of Fame and Museum’s “Artist In Residence” in 2008.

As Jerry Douglas continues his incalculable influence on country, Americana, bluegrass and their many related genres, he forges ahead as a true pioneer in American music.