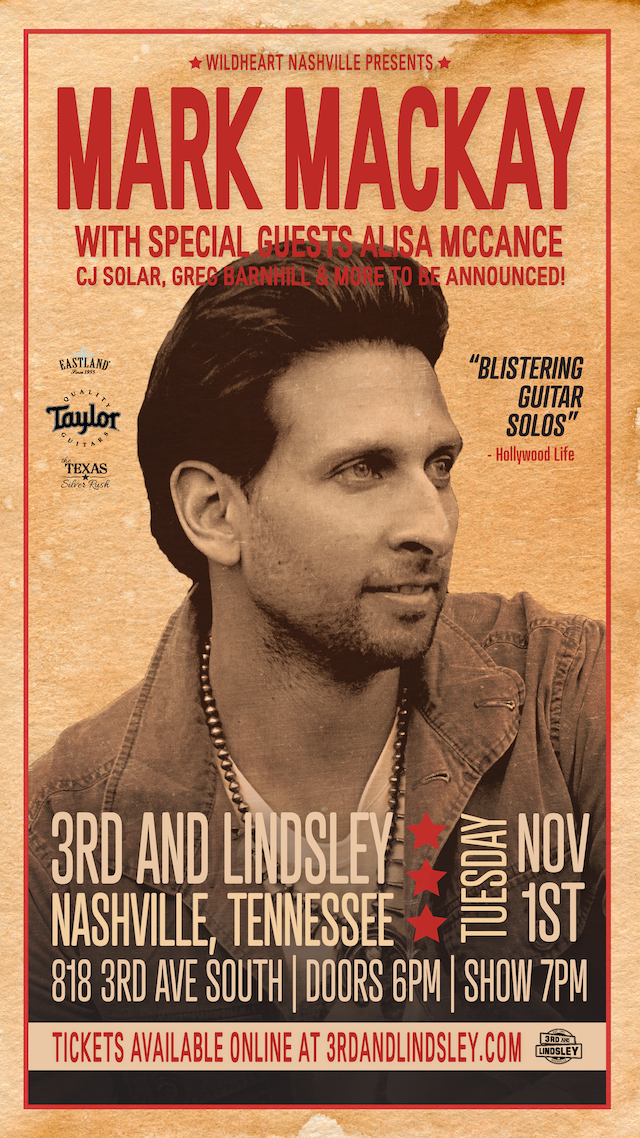 An evening with Mark MacKay!

Mark MacKay: Country roots, rock and roll heart, and spellbinding songcraft: Recording and performing artist Mark Mackay has left his boot prints on stages like Nashville’s famed Ryman Auditorium to Colorado’s Red Rocks Amphitheatre. As a headliner, a festival act, or highlighting bills across the country with an array of performers including Tim McGraw, Blake Shelton, John Rich, and Eli Young Band, plus rockers like REO Speedwagon and 38 Special — Mark Mackay captivates audiences with fretboard mastery and memorable hooks. “Summer Slowdown,” the first single in a series of forthcoming releases is a prelude to a season of renewal, signaling a welcome return to touring, as Mark Mackay hits the road from his home base in Nashville.

Alisa McCance: Alisa has had quite the career in the country music scene. Her fiddle playing and unique

songwriting abilities have paved the way for her to open for Little Big Town, Clay Walker and Nitty Gritty Dirt Band just to name a few. She has been releasing new music produced by Radney Foster.

CJ Solar: With the fuel of both Southern rock and country music influences pumping through his veins, it’s no surprise that CJ Solar is a natural at fusing the two worlds. Combine that with Delta blues, compliments of a childhood spent in Cajun country, and you’ve got pure musical. Already turning heads throughout Nashville, Baton Rouge and beyond, having been named one of the “New Artists You Need To Know” by Rolling Stone Country. He's also penned songs for Jason Aldean, Jerrod Niemann and Justin Moore, while also writing number one singles for Jameson Rodgers with 2020's "Some Girls" and Morgan Wallen's breakout hit "Up Down" featuring Florida Georgia Line.

Greg Barnhill: Originally from New Orleans, Barnhill has been writing and performing his entire life. Artists from Etta James, Martina McBride, and Jessica Simpson to Chicago, Tim McGraw, Lee Ann Womack, Leona Lewis and many in between have embraced his songs. “Walkaway Joe,” recorded by Trisha Yearwood and Don Henley, was a significant milestone to his career. The song went on to earn him a Grammy nomination as well as the respect of his peers. Greg is one of Nashville’s first call master vocalists. He performs around the world with amazing artists and songwriters. You can hear Greg’s voice on the recordings of Tim McGraw, Toby Keith, just to name a few..