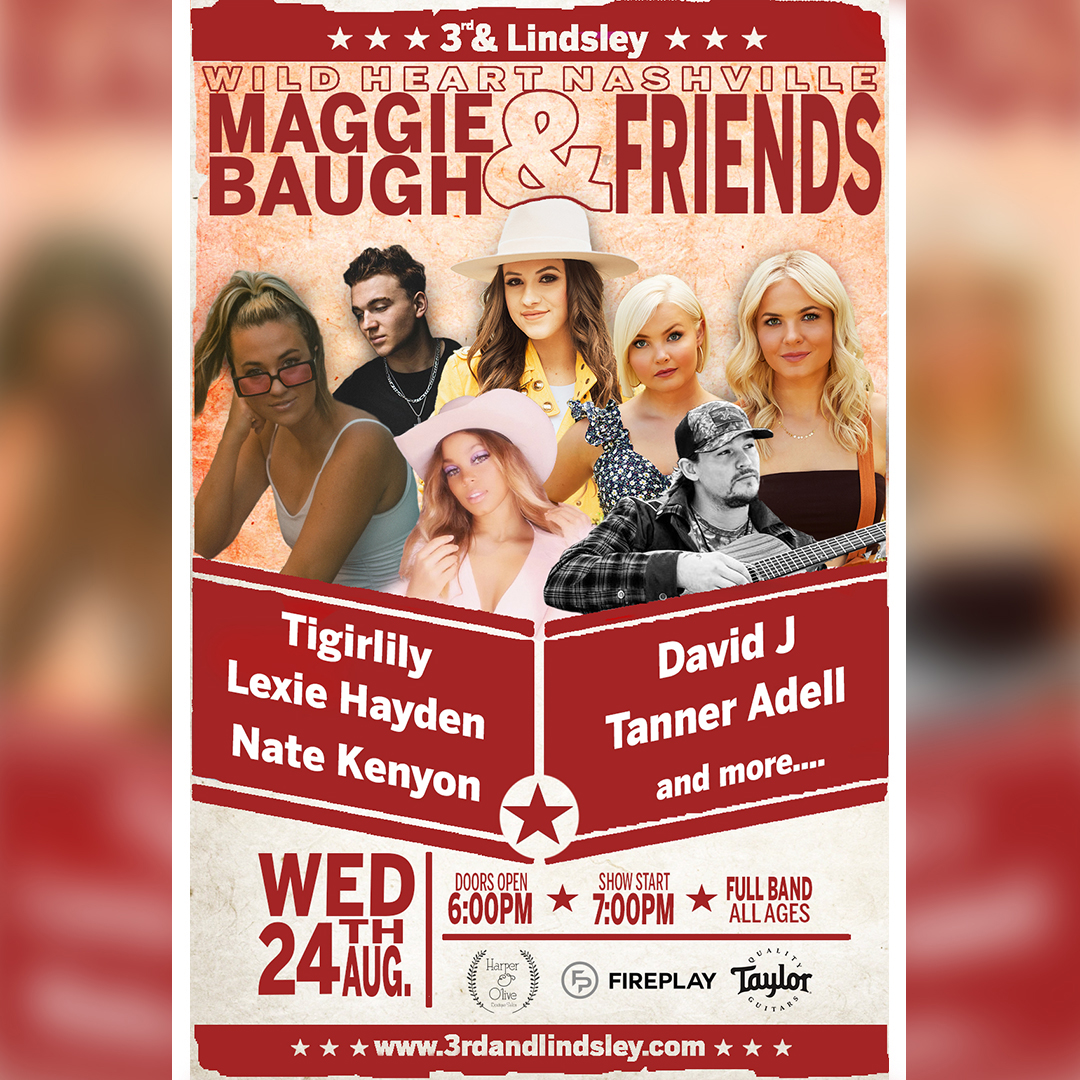 
Opening the Night: Forest Romm: A newcomer to Nashville (Just a few weeks now) Forest uses the banjo as her primary instrument, and her debut album, "Roll the Dice", is expected to be released in Fall 2022, Forest expanded her musical palette beyond typical Americana standards while studying at Berklee College of Music to include more modern sounds, using chords in her arrangements that would make many Old Time clawhammer banjo players roll over in their graves.

Maggie Baugh: Singer, songwriter, and multi-instrumentalist Maggie Baugh is considered one of the most promising new country artists on the rise.  “Think About Me” is by far one of Maggie's favorite songs to be born because of her quarantine days. Like all other touring artists, Maggie has been writing new music and will be on the road this fall with Home Free.

David J:  David’s fresh and cutting-edge approach to country pop has already made him into a viral hit maker, and TikTok sensation. Scoring an incredible response to his 2021 lead single “Lost My Heartbreak,” he has toured with artists like Granger Smith, Chase Rice, Mitchell Tenpenny, Blake Shelton, and more.

Tigirlily: In Feb. 2021, Tigirlily went viral teasing a new song, “Somebody Does” on their socials. Upon its release, “Somebody Does” debuted at #1 on the iTunes all-genre charts, and has since been streamed over 4 million times and has been featured on the Bobby Bones Show and Rolling Stone Country.

Nate Kenyon: Along with pursuing his writing career, Nate has also been pursuing his artist career. He has shared stages with the likes of Luke Combs, Jon Pardi, Tyler Farr and Justin Moore just to name a few. Raking in upwards of 50 Million YouTube views in the past 2 years, he has begun building a dedicated fan base and a great foundation on which he hopes to build a long, successful, and inspiring musical journey.

Tanner Adell: Adell has written with No. 1 songwriters JT Harding, Lindsay Rimes, Will Weatherly, Justin Ebach, Chris DeStefano, Allison Veltz, and many others. She has quickly gained an impressive social following of more than 235k followers on TikTok as her debut single, “Country Girl Commandments,” was released.