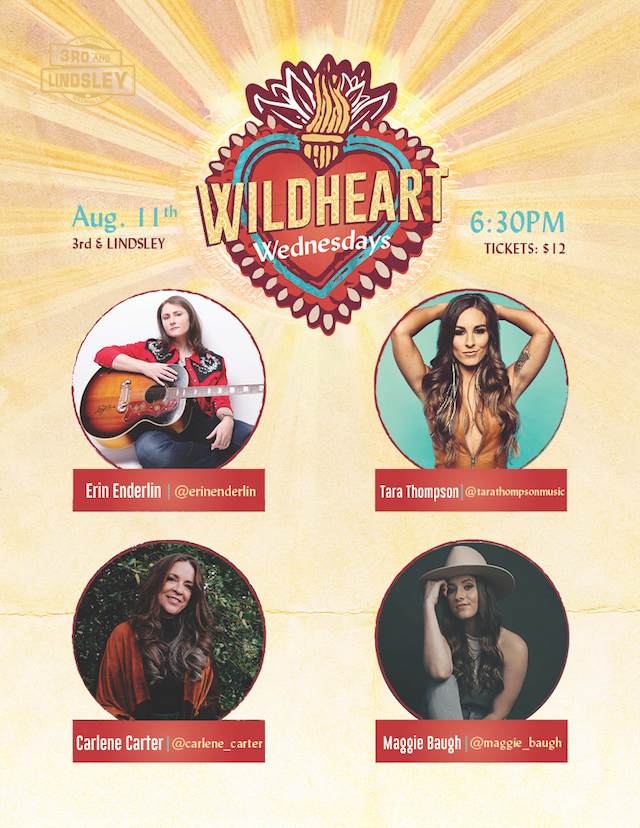 Erin Enderlin:  Named a member of the 2018 CMT Next Women of Country, Named Arkansas Country Music Awards Songwriter and Album of the Year, and runner up to Jason Isbell in the Best Singer-Songwriter field in the Nashville Scene’s Best of Nashville Issue. Her songs have been recorded by Alan Jackson, Lee Ann Womack, Luke Bryan, Randy Travis, Terri Clark and Reba. She also has a critically acclaimed record out called “Whiskeytown Crier”

Carlene Carter:  Carlene Carter comes full circle with her latest CD “Carter Girl” on Rounder Records. As the daughter of country music legends June Carter Cash and Carl Smith and granddaughter of “Mother” Maybelle Carter of the original historic Carter family, Carlene said it was her lifelong goal to make this record with the songs on the album spanning three generations of Carter Family music.  Included is the original Carter family (AP, Sara and Maybelle’s) “Tall Lover Man” and Aunt Helen’s “Poor Old Heartsick Me” and then two of her own songs, “Me and the Wildwood Rose” and a new song about Mama and John's passing called “Lonesome Valley 2003”.  Carlene is excited to be singing some of the songs from the CD to live audiences for the first time. She has always blazed her own trail as she made history touring with Lori Morgan and Pam Tillis on what USA TODAY called “the first all-female major country tour.

Tara Thompson:  Raised in the foothills of the Great Smokey Mountains she left home at a young age to pursue her dreams in Nashville. She played all the honky-tonks in Nashville and wrote her first song at 16. She has music in her blood being Loretta Lynn’s cousin and all. She has been working on her full-length album proving that she belongs in country music.