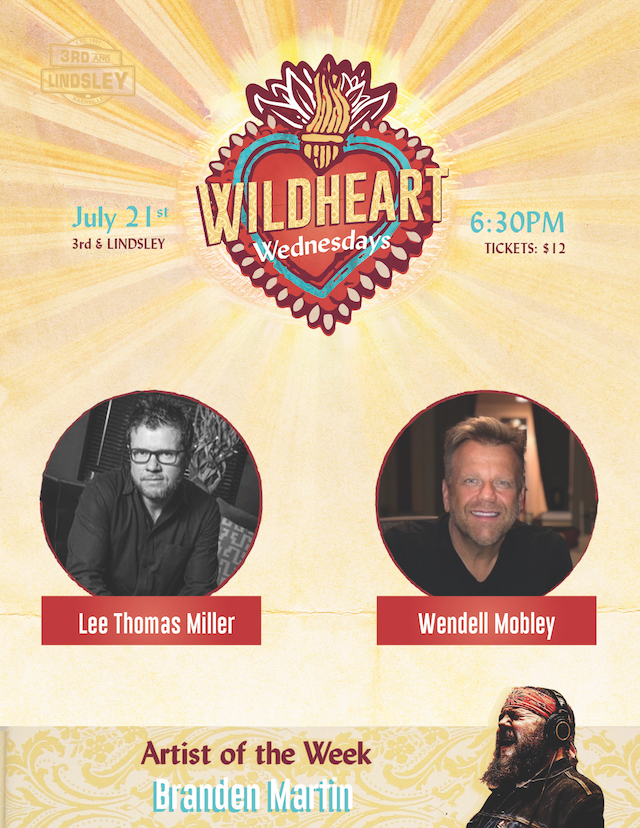 Join me in celebrating the Wildhearts, the songwriters and musicians who aren’t afraid to create music with the freedom and courage to be who they are and know what they want. There’s a depth to the music in Nashville so come help me raise up the songwriters and recording artists of country, the blues, bluegrass, pop, gospel and jazz. See you there Wildhearts!


Wendell Mobley: Ten #1 Records, 2 time ASCAP songwriter of the year winner. Grammy and ACM nominated. Chances are you have heard his songs but if you haven’t heard him play and sing them you are really missing out. Here are a few – Randy Houser “How Country Feels”, Rascal Flatts “Take Me There” , “Fast Cars and Freedom”, “I Melt”, “Banjo” and “Changed”, Kenny Chesney “There Goes My Life” and “How forever Feels”, Jason Aldean “Tattoos On This Town” and his most recent number one “A Little More Summertime” as well as hits for Keith Urban, Lee Brice, Joe Nichols, Carrie Underwood and many more.

Lee Thomas Miller: Seven #1 Records, ACM and CMA award winner. Most recently he co-wrote the Brother’s Osborne single “It Ain’t My Fault” earning the brothers’ a Grammy for their performance. His other big hits include Brad Paisley “I’m Still A Guy”, Christ Stapleton “Whiskey and You”, Jamey Johnson “In Color”, Trace Adkins “You’re Gonna Miss This” and Tim McGraw “Southern Girl”. He has also won several prestigious “Songs I Wish I Had Written” awards and 10 BMI awards. He spent time in Washington DC representing and lobbying for the rights of the American Songwriter.