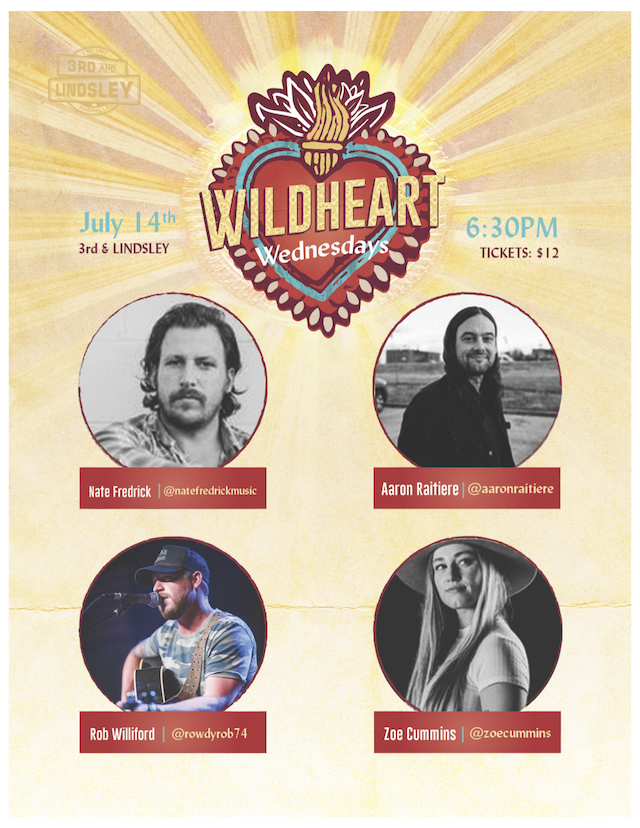 Join me in celebrating the Wildhearts, the songwriters and musicians who aren’t afraid to create music with the freedom and courage to be who they are and know what they want. There’s a depth to the music in Nashville so come help me raise up the songwriters and recording artists of country, the blues, bluegrass, pop, gospel and jazz. See you there Wildhearts!

Ben Burgess: After landing his first career cut with the Jonas Brothersʼ “Chillinʼ In the Summertime,” he moved to Los Angeles, CA. But, Burgess was often told that his “twang was too loud.” He relocated to Nashville, TN, in 2010, and was welcomed with open arms. Burgess started writing with Warner Chappell Music in 2015, where he began stockpiling major cuts across all genres like Big Loudʼs multi-week #1 smash with Morgan Wallenʼs “Whiskey Glasses” (3X PLATINUM), Tyler Richʼs GOLD-certified “The Difference,” Pat Greenʼs “Drinkinʼ Days” (Texas radio #1), Lil Wayneʼs “Dreams,” Martin Garrix & Troye Sivanʼs “There for You,” Dierks Bentleyʼs “My Religion,” HARDYʼs “SIGNED, SOBER YOU,” and many others.

Nate Frederick: “Somewhere in trying to figure out how to craft a good song, I figured out how not to just write a pile of sad songs,” Nate Fredrick says about his new album, Different Shade of Blue. “It’s not that my situation is different or even better, but I’ve found a different way to perceive my personal circumstances.” That level of introspection is clear throughout Fredrick’s debut album, 11 tracks recorded at Nashville’s Farmland Studios with producer David Dorn. The collection sounds as familiar as what you might hear on a friend’s back porch, but Fredrick’s lyrics are bound to get stuck in your head as he works through his relationship to both himself and his home—where he’s from as well as Nashville, where he moved in 2015.