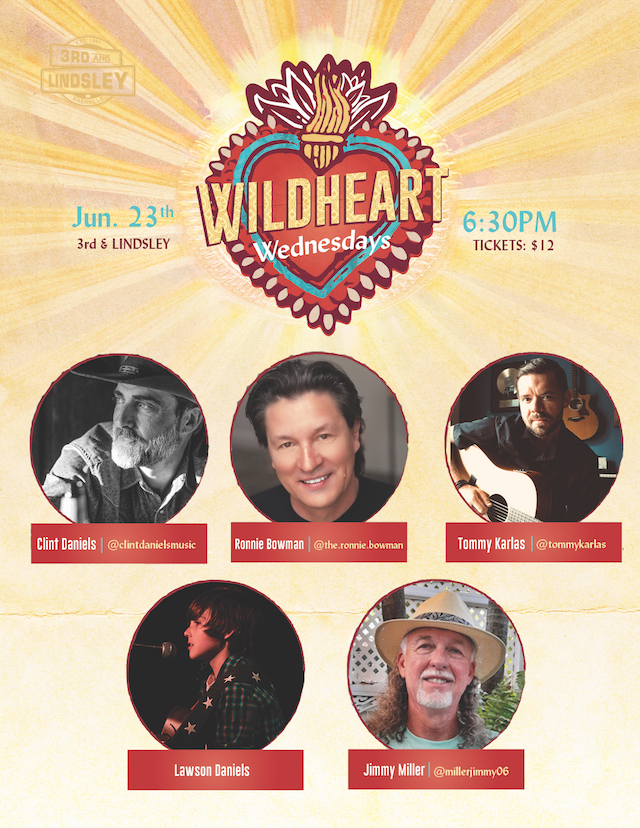 Join me in celebrating the Wildhearts, the songwriters and musicians who aren’t afraid to create music with the freedom and courage to be who they are and know what they want. There’s a depth to the music in Nashville so come help me raise up the songwriters and recording artists of country, the blues, bluegrass, pop, gospel and jazz. See you there Wildhearts

Clint Daniels: #1 singles “Some of It” by Eric Church, “Brokenheartsville ” by Joe Nichols and “Roll With Me” by Montgomery Gentry.  Other hits include “God Must Be Busy” by Brooks and Dunn, “I Can’t Love You Back” by Easton Corbin and “She Ain’t In It” by Jon Pardi. Daniels has also written songs for George Strait, Josh Thompson, Brandy Clark and Clay Walker to name a few.

Ronnie Bowman: Became a household name in the Bluegrass community. With the release of an additional four albums as a member of the Lonesome River Band, Ronnie also recorded four solo projects. He has been awarded IBMA Male Vocalist of the Year three times, has twice earned the IBMA song of the Year award ("Three Rusty Nails", and "Cold Virginia Night"), and was awarded the Gospel Performance of the Year award for "Three Rusty Nails". As a songwriter he has #1’s with Brooks and Dunn, Kenny Chesney and Lee Ann Womack. Plus an ACM song of the year he wrote for Chris Stapleton, “Nobody to Blame

Tommy Karlas: A singer/songwriter who at the age of 19 secured his first publishing deal with Hamstein Music. Since then Tommy’s had songs recorded by Randy Travis, Blake Shelton, Montgomery Gentry, and many more. Including the #1 Roll With Me which went on to be the fastest rising and most downloaded song of Montgomery Gentry’s long career. Since then Tommy’s co-written songs with Darius Rucker, Matt Ramsey of Old Dominion, Troy Gentry, Tom Douglas, Bobby Braddock, and many more. He currently writes for Given Music Entertainment.