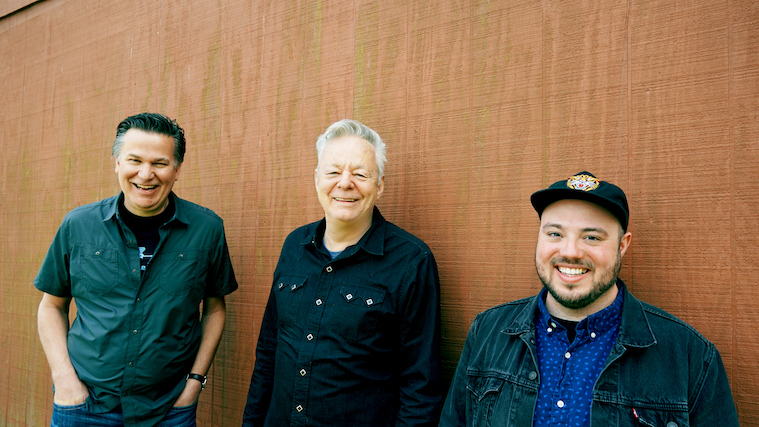 TOMMY EMMANUEL, CGP TOMMY EMMANUEL has achieved enough musical milestones to satisfy several life times. At the age of six, he was touring regional Australia with his family band. By 30, he was a rock n’ roll lead guitarist burning up stadiums in Europe. At 44, he became oneof five people ever named a CPG (Certified Guitar Player) by his idol, music icon Chet Atkins. Today, he plays hundreds of sold-out shows every year from Nashville to Sydneyto London. He’s piled up numerous accolades, including two Grammy Award nominations. A noted finger style guitarist, EMMANUEL frequently threads three different parts simultaneously into his material, operating asa one-man band who handles the melody, the supporting chords and the bass all at once. His talents, which translate in any language, carry him to the far corners of the globe, but EMMANUEL never plays the same show twice, and he improvises big chunks of every date. That leaves him open to those technical imperfections, though they also provide some of the humanity to an other-worldly talent.On May 8, 2020, he released a newly recorded career-spanning double album, THE BEST OF TOMMY SONGS.

Take a 15-time IBMA (International Bluegrass Music Association) Resophonic Guitar Player of the Year and a Tennessee-born guitar prodigy called “Nashville's hottest young player” byAcoustic Guitar magazine, and you haveRob Ickes and Trey Hensley, a powerhouse acoustic duo that has electrified the acoustic music scene around the world.Known for their white-hotpicking and world class musicianship, as well as their soulful stone country vocals, theGRAMMY® nominated duo cleverly and uniquely melds bluegrass, country, blues, rock, jamgrass, and string band music of all kinds to create a signature blend of music that defies restrictions of genre. . Hensley, who earned his first IBMA Guitar Player of the Year nomination in 2020, made his Grand Ole Opry debut at the age of 11 (thanks to an invite from Marty Stuart with EarlScruggs) and has appeared on stage with the likes of Johnny Cash, Peter Frampton and OldCrow Medicine Show.All three of the albums released by Ickes and Hensley have received widespread acclaim, including their debut Before The Sun Goes Down, which garnered aGRAMMY® nomination, and the combo's most recent releaseWorld Full of Blues, which features collaborations with Vince Gill and Taj Mahal